Diane Cooper-Gould is the current President and a Founding Member of Fairfax County SEPTA.  She is a mother of two special needs / twice exceptional children and Diane, her husband and daughter are all dyslexic. Early in her family’s special needs journey, she realized that the greatest support and guidance she received was from other special needs parents. Her desire to connect, educate, empower and support special needs parents led her to found a Special Needs Parent Support Group online in 2013.

In the fall of 2015, Diane began searching for a way to bring parents together to form a collective voice to advocate for increased access to services and support for their families and each other. After guidance from a friend at Arlington SEPTA, the idea for a Fairfax County SEPTA was born! Simultaneously, Diane started the Special Education Committee for her local school PTA.

Diane and her husband both both graduated from the FCPS Thomas Jefferson High School for Science and Technology. Diane received her BA in Drama from the University of Virginia. Prior to being a full-time special needs mom, Diane worked as an actress, choreographer, and teacher of acting, stage combat, and dance. Previous board positions include serving as both At-Large ember and President of her HOA. Diane’s favorite coping strategy is gallows humor.

Brooke Varma, LCSW received her Bachelor’s Degree in Psychology from George Mason University and her Master’s Degree in Clinical Social Work from Virginia Commonwealth University where she was also the recipient of VCU’s Social Justice Award.

Her passion for the disability community has guided her professional career; first as a case manager with Brain Injury Services for nearly a decade. Today Brooke is the Director of Possibilities Ministry, a ministry that supports children and adults with different abilities, at Christ Church in Fairfax Station. Brooke is also proud to be a founding member of Inclusion Consultants where she supports families through the IEP and Waiver processes.

Brooke’s genuine love for, and understanding of, advocacy has led her to have a prominent role in local and statewide advocacy efforts. Brooke has served on the Board of Directors for the Arc of Northern Virginia and was the recipient of the 2016 Martha Glennan Disability Inclusion and Equality Award.

In addition to her professional passion for the disability community, Brooke has an older brother with Down syndrome and she and her husband, Ajay, are the proud parents of a daughter with apraxia – giving her a unique personal perspective as she works directly with individuals and supports the disability community as a whole.
Ami Todd – Treasurer

Ami Todd is a military wife and mother of a little girl with a dual diagnosis of Down syndrome and autism, currently enrolled in special education pre-k in Fairfax County. Her daughter’s complicated medical history gives her a unique perspective on therapies, instruction, and health care.  She is involved in several organizations benefiting military families and special education.  Ami is currently volunteering as a patient advocate for children with intellectual disabilities and complex medical issues, including for insurance negotiations and IEP advocacy.  She is also passionate about educating special needs parents about available resources within the community.  Mrs. Todd graduated from the College of Charleston with a degree in Classics and History. She later pursued a Masters of History from the University of Colorado at Boulder. After a brief stint as a professor she moved into finance as a pension-investment and benefits manager with clients around the country. Mrs. Todd left the world of finance to focus on her daughter and pursue volunteer opportunities.

Laura Allen received her Bachelor’s of Science degree from Ball State University in Journalism in the Advertising Sequence. For over 20 years, she has been involved in the communications career field, fundraising, and volunteer work. Her relationship began with the disabilities community as Communications Director of the Michigan Dyslexia Institute/Dyslexia Association of America, She oversaw a communications program that reached millions of individuals. She helped dispel the myths surrounding dyslexia by creating a number of communication products, media and special events, and fundraisers. Additionally, she created and directed a one-week summer camp for children with dyslexia that still exists today.

From there, she became the Technical Communications Manager of the Air Force Office of Scientific Research, she oversaw a team responsible for public affairs, marketing, protocol, and history recording. For the five years I worked at as a government employee and two years as a contractor, She provided a “communications makeover” for the organization by leading a team of military, reservist, civilian and contractor personnel dedicated to creating communication products and special events to promote the benefits and proud history of Air Force basic research.

She left the workforce in 2005 to support her family and has stayed an active volunteer with PTAs and the Girls Scouts as a leader for six years. In 2017, she became a Northern Virginia District PTA Volunteer of the Year Award Finalist (1 of 3) Nominated by Camelot Elementary School PTA to compete against volunteers of Alexandria City, Arlington County, Fairfax City, Fairfax County and Falls Church City PTAs and PTSAs. She also received an Outstanding Leader Award, from Girl Scouts of the Nation’s Capital.

Her experience of working with individuals with disabilities is personal as her son started in Child Find in Fairfax County when he was three. He was diagnosed with sensory integration disorder in 2008 and autism/ADD in 2010, and dyslexia in 2012. One of the hardest things for her was knowing how difficult it is for him to make friends. All she wanted was for him to have friends. She went to his classroom in second grade and read the students a book about autism and talked to them about her son’s strengths. The children were so accepting and from that day forward, things changed at Camelot Elementary School in Annandale, VA. She wrote the principal and asked if they could do something more to create awareness about those with disabilities.

First, she became a Special Education Liaison for her school.  Laura also was a founding member of The Camelot Elementary School Acceptance Team in 2012, a group made up of administrators, teachers, staff, and PTA parents. The team was created to promote the acceptance of all students at Camelot, teach and give students the tools and knowledge they need to fully accept one another, and to encourage and show students how to be a friend to anyone and everyone, in all walks of life, both in and out of school. Funded by the PTA, she is in her sixth year helping lead the Acceptance Team meetings several times during the year and accomplishes the three main parts of the Acceptance Team’s mission: The Camelot Buddy Program (With over 132 students this year), Acceptance Awareness Activities including Acceptance Celebration Month, and a Special Education Parents Support Group. She also has been a committee member and co-chairman of International Night at Camelot for the past six years.

The last two years, she was also an active PTA member at Frost Middle School as a Special Education Liaison. She helped start a parent support group and provided assistance with the Frost Unified Special Olympics team when needed. This year, she also became the Frost MS PBIS PTA Liaison, (Positive Behavior Interventions & Support). Working with a Frost Counselor, she helps with PBIS, the restructured student recognition system, and coordinates PTA support at the “Frost Zone Store.” The store “sells” goodies and involves taking student zone cards for items students want to “purchase.” All incentives are labeled with a “price” and they will line up to purchase items set up on the stage. Staff members issue “zone cards” to
students who demonstrate the four Frost principals (respect, honesty, responsibility, and good citizenship).

In February, she began temporary part-time employment in the Marketing Department at Fairfax Radiological Consultants, PC. In April, she will begin to work full time with this company in a full time position supporting the marketing and compliance offices.

April 2021 – Testimony to Fairfax County Board of Supervisors 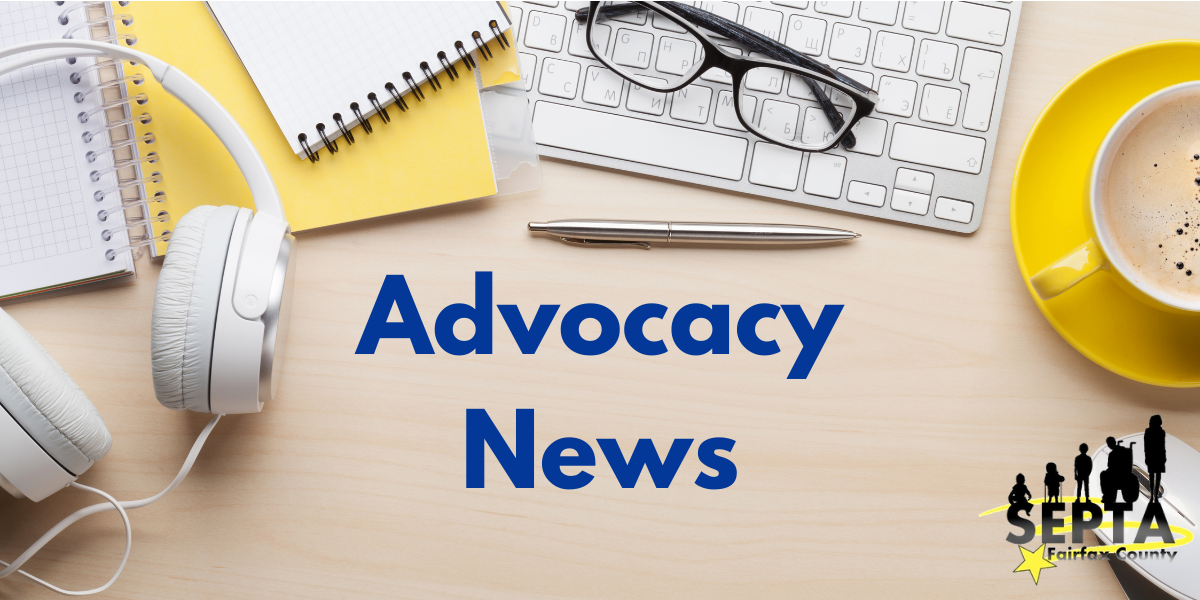 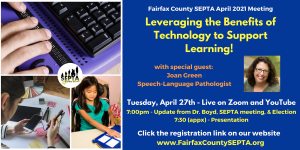 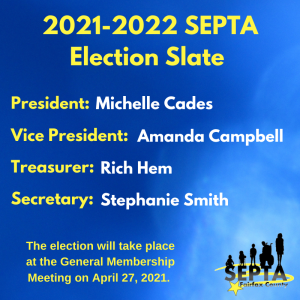 Shopping online? Use AmazonSmile and set your charity to Fairfax County SEPTA!

Did you miss a presentation? Check out the FCPS Parent Resource Center YouTube for the videos!

UPDATED WITH RESOURCES FROM VDOE, NATIONAL CENTER ON EDUCATIONAL OUTCOMES AND THE TIES CENTER 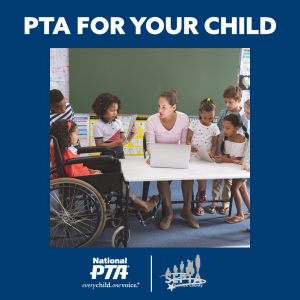 Fill out the membership form here!
If prompted, use school code SN75N5 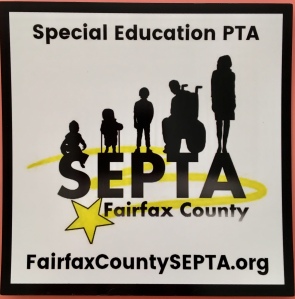 Show your support for SEPTA and help us raise funds for our teacher grants and awards at the same time!